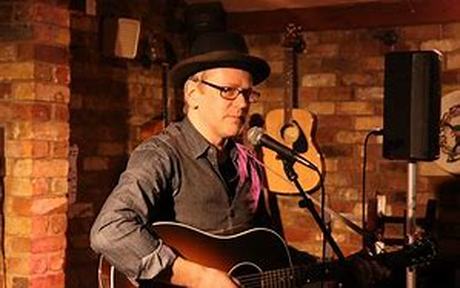 Paul McClure aka The Rutland Troubadour, is one of the hardest working artists around. Continually gigging and making music. He takes his inspiration from his world and the people in it.
Paul has subsequently released a number of albums and is working on a new album which he is looking to release in the autumn to coincide with his tour.
His involvement in 'Nebraska Sessions - A Tribute' to mark the 30 year anniversary of Bruce Springsteen's 'Nebraska' led to his first solo output, the excellent debut album in 2014 "Smiling From The Floor Up". A stripped-back release showing his early influences such as Bob Dylan, Joan Baez and Johnny Cash.

"Paul is an incredibly talented songwriter with big catchy melodies. His songs are at times very humorous, rebellious, sometimes sad but always refreshingly honest. His material is like him - confident, highly original and totally individual" - Think Country Magazine

"He is one of the bedrocks of UK alt-country, folk and Americana scene" - 3 Chords and the Truth

Support comes from Roswell - a brand new Americana / Folk / Indie duo featuring singer-songwriters Zoë Wren and Jasmine Watkiss.
​
Based between Cambridgeshire and London, Roswell formed in December 2017 after what can only be described as "musical love at first sight" at an open mic night in Ely, Cambridgeshire. They are currently in the studio recording their debut EP

For more info go to ….. https://www.facebook.com/RoswellBandUK.