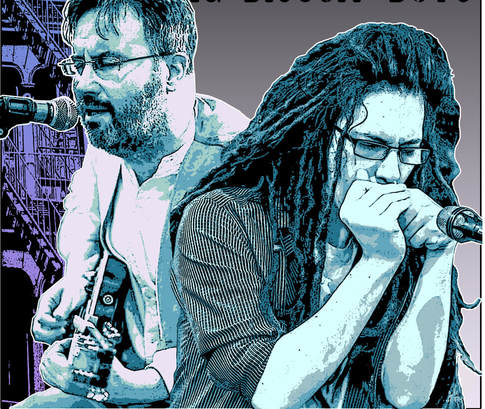 This is the second visit of The King Biscuit Boys to Forest Folk and Roots. Back in September 2016 they supported American bluesman John Emil and went down such a storm we’ve been waiting to get them back ever since.

The King Biscuit Boys are Jonathan and Craig, an acoustic blues duo from Buckinghamshire and Northamptonshire who met up in 2011. Since then have playing music predominantly from the 30's, 40's and 50's - they like to come and entertain.

Their influences include Sonny Terry & Brownie McGhee, Junior Wells & Buddy Guy and just about all other harmonica and guitar blues duos. The blues is a broad-church and you can expect to hear just about all styles from the early raw Delta and various pre-war styles through the post war emergence of the electric styles – with a bit of psychedelia and rock blues thrown in for good measure.

They play a collection of acoustic originals & reworked standards, often with humorous twists in a variety of styles.  Jonathan handles the vocals and guitar parts while Craig is the one who adds the virtuosity from various instruments including harmonica, washboard, melodica and if you are lucky HandPan & spoons along with resonator guitars. Craig wants to play the piano more, but Jonathan’s Fiat 500 won’t cope with that as well.
They are a mesmerising act to both watch and listen to.

More information on The King Biscuit Boys at http://www.somethinglikethis.org.uk
Kicking off the live music on the night is local acoustic artist Mitchell Taylor who recently featured at Scribal Gathering’s Billy Bragg night - a night dedicated to the music and influences of Billy Bragg.
Mitchell’s original material, which he’ll be playing on the night, is in the harder-edged folk-punk style with a bluesey twist. We may even hear some of Mr Bragg’s songs.
CHECK OUT SOME OF OUR PHOTOS OF THE NIGHT .....
Powered by