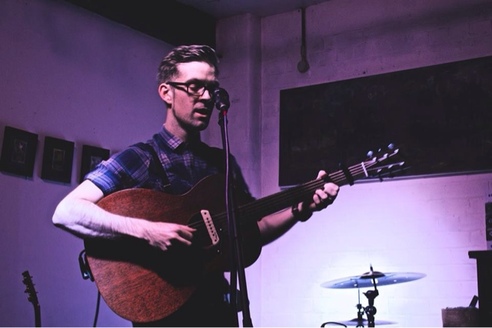 Stylusboy, Coventry singer-songwriter Steve Jones, creates indie-folk music influenced by cult contemporary songwriters like Damien Rice and Ryan Adams as well as classic performers such as Nick Drake and Neil Young.
Stylusboy has performed all over the UK including sell out shows at Green Note in London and Warwick Arts Centre in his home city of Coventry.  He has supported the like of John Smith, Newton Faulkner, Danny and the Champions of the World, Grant-Lee Philipps, MG Boulter and Lucy Ward .  As befitting a modern day troubadour he’s also performed one-to-one shows in Emily Barker’s Folk in a Box, regularly plays online gigs to audiences all around the world and has played numerous house shows.

Stylusboy has performed his intimate folk music at festivals such as the BBC Introducing Stage at Wychwood Festival,Warwick Folk Festival and Greenbelt Festival. The lead track from his Whole Picture EP became a number 1 in Indonesia with EP later becoming ‘EP of the Year’ on music blog ‘This is a Popscene’.

Stylusboy is signed to Wild Sound Recordings, the label founded by renowned songstress Polly Paulusma and distributed worldwide by the influential Proper Music. Wild Sound has released the Lantern EP and Stylusboy’s debut album Hospitality for Hope, co-produced by Paulusma and featuring the double bass talent of Nizlopi’s John Parker and the vocals of close collaborator Rachel Grisedale. The album received acclaim and support from the likes of Acoustic Magazine, R2 Magazine, For Folks Sake, God is in the TV as well as praise from BBC Introducing, 6Music, Xfm and Amazing Radio. In December 2015 Stylusboy released the limited Christmas Light EP and a live album Tales from Home, both which hand unique handmade sleeves made by Steve himself.

Stylusboy is currently writing his next collection of songs and performing his special songs at intimate shows around the UK.