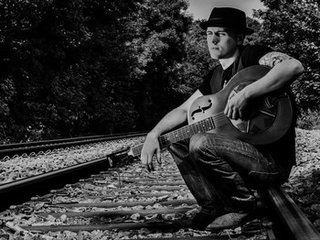 Forged in an old pit village outside of Mansfield, singer-songwriter Benjamin Bassford is a dynamic artist that can be found rambling between both an acoustic solo sound, to leading a band fuelled with a grit and distortion, doused and nuanced in; Blues, Roots, Folk and Country.

Benjamin's style of performance can be compared, in some respects to his influences. However, while tipping his hat to the influences from which his sound has grown, Benjamin brings his own cards to the table.


His latest offering  "Songs from the Blue Door" marks the next step within the maturing of Benjamins' style and sound. Carved from the already lived experiences of this artist, the E.P unconsciously looks in retrospect, recounting both defining & poignant moments.
'Good British acoustic blues is a rare commodity but Benjamin has certainly put himself up there with the best, these tracks are spellbinding...' - Adrian Blacklee of Blues Matters

For more information on Banjamin and to listen to his tracks go to https://www.benjaminbassford.com/music

Pleased to confirm that after having to cancel his previous support slot LEVI CUSS is back over here from Canada on tour and is supporting Benjamin . Check out Levi on his website at http://www.levicuss.com/home.html
Doors open at 7:30 and tickets are £10 (£5 students) available very soon from The College Arms Bar and on-line at
http://www.wegottickets.com/event/390865

CHECK OUT SOME OF OUR PHOTOS OF THE NIGHT BELOW...