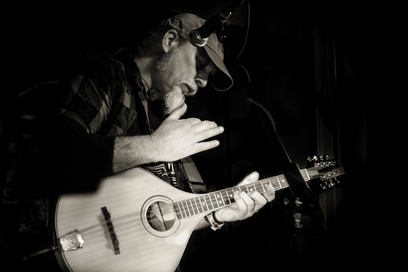 Billed as STEViE SIMPSON – One Bloke One Mandolin, Stevie Simpson has been playing regularly at motorcycle rallies and festivals all over the UK since 2000 receiving some great reviews and picking up new fans at every gig.

​Playing a mixture of original country and folk. It's a bit rootsy, a little bit bluesy and for those that like 'something they know', well, you may well get the occasional bit of that as well.

STEViE has released six studio albums: ‘…. a little further down the line’, ‘Too Poor For Trailer Trash’, ‘Ride’ ‘Garage Songs’, ‘Some Days Are Diamonds’ and ‘Fair Travels & Fine Times’ released in September 2017, between them containing seventy-three original recordings. In 2013 he put out a live CD, recorded at The Assembly Rooms in Derby when supporting Simon Friend’s Seismic Survey.

He has headlined at The Clarence Park Free Music Festival and appeared at numerous other festivals including The Acoustic Festival Of Britain, Americana,  Beautiful Days, Wickham Festival, Bearded Theory, Blissfields, Something Else In The Dean, Westport’s Folk & Bluegrass Festival in Ireland, Pullman City Country Music Festival in Bavaria, Germany and the Akaciju aleja bard festival near Kaunas in Lithuania along with many gigs around the UK and Germany.

He has shared billing with Status Quo, Jethro Tull, Dave Edmunds, Dr Feelgood, Kathy Mattea, The Levellers, Breed 77, The Answer, The Damned, Fun Loving Criminals, Wilko Johnson, Hawkwind, Asleep At The Wheel and John Otway, The Stranglers, Leatherat, Dumpy’s Rusty Nuts, The Bad Shepherds, Focus and Ricky Warwick to name but some.
​
For a good few years he has, amongst many gigs, regularly played/compered marquees for the National Association for Bikers with Disabilities (NABD) at their rallies and became a patron of the NABD in 2010.


For more information go to https://oneblokeonemandolin.com
Support for the night is from Birmingham based acoustic artist LEON C.