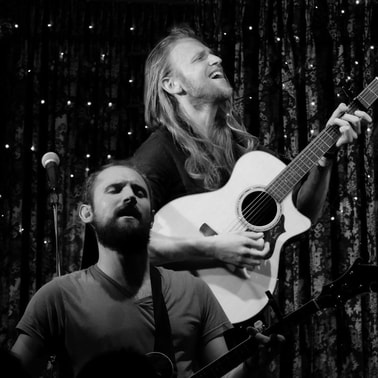 We're pleased to bring Stables back to Forest Folk and Roots. Formed in January 2016 during late night drinks between Matthew and Daniel in London. Matthew was working on a new project idea at the time and, after playing through what was to become their first single, 'Steam', at 5 am, the duo was born, and quickly went public four months later.

Their debut album 'Beyond Brushes' was released  to critical acclaim just nine months after, in August 2016, and was championed by the likes of BBC's Steve Lamacq, Tom Robinson and BBC6 Recommends amongst others, soon establishing them firmly on the circuit, with a growing fan base.

Just a month after the release Matthew and Daniel embarked on their first UK headline tour, followed by a small French headline. Stables put emphasis on 'energy' when playing live; switching instruments and producing the sound of a full band, with big harmonies and varied styles.

Matthew says; 'I always wanted to create a simple sound that could then be taken further when needed, from a small folk club, to a large festival stage'. Stables have gone on to tour the UK further, performing at major festivals including Glastonbury Festival and several European, headline tours.

Stables' second album, 'Reverie', was released in February 2018 with a launch at St Pancras Old Church. 'We're incredibly proud of this record and can't wait for people to hear it'. Matthew calls it an 'almost break up album' that he wrote whilst in a 'period of relationship unrest, which resolved during the process'. 'This is the album we always wanted to release when we first imagined Stables. We love our debut, but this feels like the sound we always set out to produce'.

For more information go to :- www.stablesmusic.com
Support for the night is from LUKE JAMES WILLIMS
​
CHECK OUT SOME OF OUR PHOTOS OF THE NIGHT .....