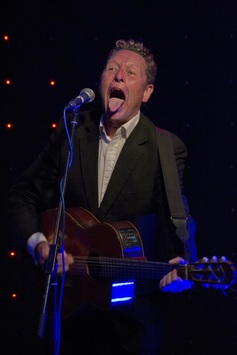 THE GERRY COLVIN BAND make a very welcome return to Forest Folk and Roots. They went down a storm last time they played and this time you can expect tunes form the new album "Six of One Half a Dozen of the Other" as well as a run through of his extensive back catalogue.

In the early 1980's Gerry co-founded and fronted the legendary John Peel favourite skiffle-cowpunk indie outfit 'Terry & Gerry'. This seminal band toured Europe and the USA and appeared on countless Radio and TV shows including "The Tube" and "The Old Grey Whistle Test". Their five singles and album all reached No.1 in the indie charts.  In 2014 they reformed and went on to support Status Quo on tour.

Gerry Colvin's live performances are memorable to say the least !! - he has boundless energy and engages the audience from the off with inter song banter and stories and the songs  - well they speak for themself  - one minute you'll be laughing and singing  along - the next wiping away a tear.

Perhaps one of the countries best songwriters Gerry has worked in Nashville as a professional songwriter and back in the UK collaborated with Alison Moyet, co-writing on an album project. He also penned TV themes, musicals, film scores and wrote and presented for BBC Radio 2.

There's more info about Gerry at http://www.gerrycolvin.com/
Support is from 20 year old Amii Dawes. Hailing from Northampton Amii starting playing guitar and keyboards at an early age inspired by John Lennon and Bob Dylan - her debut EP "Little Blue Book" is out on I-tunes
CHECK OUT SOME OF OUR PHOTOS OF THE NIGHT BELOW...
Powered by