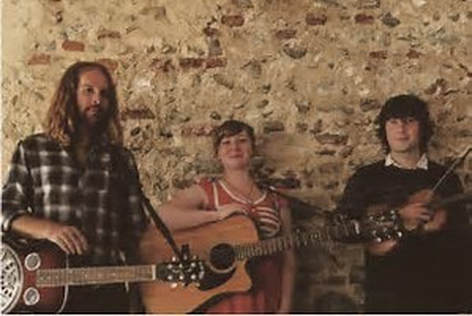 The trio are made up of Christina Alden (Guitar & Vocals), Alex Patterson (Violin & Mandolin) and Noel Dashwood (Dobro & Vocals)

Their music takes influence from folk traditions from both sides of the Atlantic with uplifting instrumentals and self-penned songs depicting tales of young travellers, sleepy seas and their affection for home.

The independently-released debut album ‘Call Me Home’ released in 2016 was written and produced at home in Norwich and is lovingly presented in attractive handmade covers, designed and hand-printed by the band.

The trio are playing Cranfield as part of an extensive UK tour of festivals and clubs playing songs from the first album along with new material.

★★★★ Songlines  –  ‘Obviously something of enormous promise’

You can find more information at https://aldenpattersonanddashwood.com

CHECK OUT SOME OF OUR PHOTOS OF THE NIGHT .....
Powered by