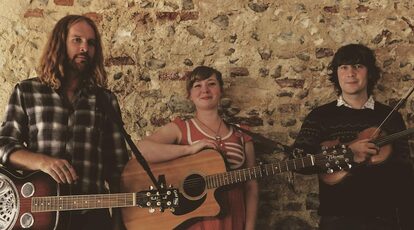 This is the second visit to Forest Folk and Roots by Norwich based folk / Americana trio Alden, Patterson and Dashwood.

The trio, who weave rich vocal harmonies along with fiddle, dobro, guitar and mandolin within beautifully written original songs and melodies -are made up of Christina Alden (Guitar & Vocals), Alex Patterson (Violin & Mandolin) and Noel Dashwood (Dobro & Vocals)

Their music takes influence from folk traditions from both sides of the Atlantic with uplifting instrumentals and self-penned songs depicting tales of young travellers, sleepy seas and their affection for home.

The independently-released debut album ‘Call Me Home’ released in 2016 was written and produced at home in Norwich and is lovingly presented in attractive handmade covers, designed and hand-printed by the band.

Their second Album "By the Night" released in 2018 continues on the same theme  - the trio who have recently completed a major venue tour supporting Show of Hands are playing Cranfield as part of their ongoing extensive UK tour of festivals and clubs playing songs from both albums plus some new material.

★★★★ Songlines – ‘Obviously something of enormous promise’

You can find more information at https://aldenpattersonanddashwood.com

Support for the night will be announced shortly.
Doors open at 7:30pm with live music starting at 8:00pm.