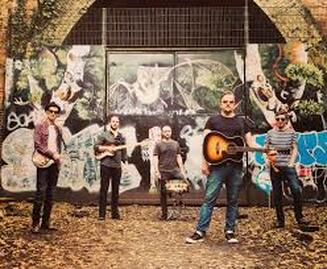 Man the Lifeboats play raucous, upbeat folk music, for those who like a drink with their tunes.
Formed in London in October 2016 in the aftermath of a manic “Skinny Lister” gig , Man The Lifeboats were born, their objective to play the same, raucous, upbeat folk music, to drag traditional folk tunes kicking and screaming into the 21st century, to craft songs with big choruses that tell stories. Songs with singalong song-writing genius and heart-on-the-sleeve soulfulness that have straight-up lyrics, pounding bass lines, lilting mandolin and fiddle melodies and stomping beats.
Man The Lifeboats have cultivated a sound that would not be out of place at a party at the end of the world -  Folk music for Shipwrecked and Salvaged souls

​Influences? Well, up there with Skinny Lister and Holy Moly & the Crackers, we have the Pogues, Bellowhead, Tom Waits, Dylan, Springsteen, Kate Bush, Frank Turner, Manu Chao, and of course, Chic.
​Throw all that in a cauldron and you end up with a blistering live experience, tales of lost evenings, ballads of doomed love and shanties about whisky-soaked nights, Michael Palin, and the end of the world.

For more information go to www.manthelifeboats.com
Support comes from British folk do The Rabbitts whose music is gentle fun and riddled with natural imagery masking darker subtexts. They draw their inspiration from both their relationship and their travelling experiences.
For more information check out www.therabbitts.com