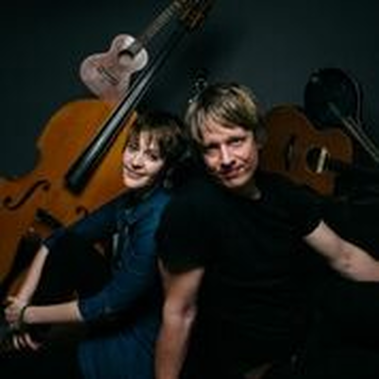 Since then, they have played many venues across East Anglia as well as travelling to Germany for their first European tour. Together they have played an array of fantastic UK festivals including Ely Folk, FolkEast and Maverick. 2016 saw the release of their debut EP ‘About Time’, which received airplay on BBC Radio Suffolk, as well as Cambridge Radio & Norfolk Radio. They play Cranfield a week before their appearance at the prestigious Great British Folk Festival

Born and raised in Suffolk, Lucy learned violin and drums at school, sung in the Suffolk Jubilee choir and started songwriting at age 15. She taught herself guitar whilst at university in Canterbury, and began performing her creations not long afterwards. At 27, she released her debut band album ’Step Right On’, songs from which you now hear her perform with Jon.
Jon, a Yorkshire boy, raised in Cambridgeshire, Norfolk and Suffolk, has been performing his own songs since his teens. A self taught guitarist, his love of driving guitar riffs is a core aspect of his song writing process. He has released three band albums, the latest of which was entitled ‘Level with me’, featuring ‘wristburner’ which is a gig favourite. The amalgamation of both their unique musical styles makes for a dynamic and ever-changing live performance.

To find out more about Honey & the Bear check out the website at: http://www.honeyandthebear.co.uk

CHECK OUT SOME OF OUR PHOTOS OF THE NIGHT .....
Powered by